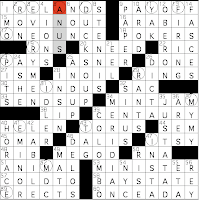 the 33rd installment of matt gaffney's weekly crossword contest, titled "I Need Your Undivided Attention," was a killer, as promised. there's no apparent theme, even though the grid is a modest 76 words (not low enough for a themeless by conventional standards). the cluing was tough, to be sure; the crossword took me longer than the last two puzzles combined. and when you finish, all you have for hints to the meta-puzzle are the title and these three starred clues:

what do these three things have in common? well, MERIDIAN stands out for one reason—it can follow PRIME. as can the other two, when you think about it, so PRIME has something to do with the answer. the title confirms this, as "undivided" gets at the mathematical sense of PRIME. the instructions tell us that: This week's contest answer phrase is four words long and a total of seventeen letters. It describes what you, the solver are if you're able to finish this week's crossword and figure out the contest answer phrase. based on the word PRIME and those instructions, i stumbled upon the correct answer and emailed it to matt on friday afternoon... and apparently i was the first one. the following conversation ensued:

Matt: paranoid check -- you did find the message hidden in the grid, right, and didn't just guess the phrase from the MERIDIAN, MINISTER and RIB hints + having the # of words and total letters?
me: message hidden in the grid, you say?
Matt: really? you didn't find it?
me: i'm looking now
don't tell me
Matt: omg funny -- I have 1 right answer, you, and you just guessed it!
me: i found MATT hidden in the grid
is that good enough?
Matt: lolz
that was serendipity
me: and ME GOD
i think you have a bit of a complex going
Matt: could be
don't you wonder why the grid was so crappy and only had 3 little theme entries?
me: oh
am i looking at the prime-numbered squares?
whoooa
Matt: ding ding ding
me: "wow, that sure does justify the crappiness of the grid"
Matt: lol
me: :P

so there you have it. i've circled the prime-numbered squares in the screenshot above so that you can see the message: READY FOR PRIME TIME. pretty fancy footwork if you ask me, and really, the grid wasn't crappy at all. matt's just being modest. (edited to add: matt has clarified to me that he was referring to the 76-word grid with only three short theme entries, as opposed to having crappy fill.)

by the way, before you ask: no, 1 isn't prime. the simplest answer to "why not?" is "because." it's just a matter of definition. i think we had the same sort of discussion here in regards to pete muller's killer NYS puzzle from leap day last year, which i still remember vividly because it gave me the worst beating i have ever taken from a crossword puzzle: i gave up after an hour with only about 15 entries filled in. not even brad wilber has pwned me like that.

but back to this week's MGWCC. as i said earlier, matt had promised it would be a killer... and apparently, that may be partially my fault:

Matt: crap I think this is too hard for people
but after your "0:01 (approximate)" comment last week I felt I had to really stick it to people this week

anyway, let's take a look at some of the clues that made this one so tough:

stuff i just plain did not know:

i've rambled on long enough, but there was a lot to talk about this week. hope you enjoyed the puzzle and the blog.